Dressed for Sunday’s walk to town, it’s “Wyatt Earp Days” and event weekends are always fun. Yes, this is a wool suit…but it’s 7 oz weight and was super comfortable!

It’s the morning after the ball but that’s not stopping us! Off to the Pump Room for brunch and then walking it off in Bath! 😎😁

It was a wet, somewhat drizzly day so we opted to not going boating as we’d originally planned…

A little wet but that quickly dried out later…It was a lot of fun. We’ll have more soon!

As a follow-on to our last post, here’s some more on the 1890s walking suit. 🙂 As previously noted, the design was inspired by the “Robe Anglaise” design as depicted in the March 20, 1898 issue of La Mode Illustree:

Only the bodice was depicted. The skirt is based on pattern blocks I had made previously based on a  number of period skirt designs.

Next, I creates a toille for the bodice based on pattern pieces that I scaled up for my size:

A note here- the “bodice” is in reality a faux jacket-bodice and it’s actually a very complicated design. Essentially, the front is done like a bodice and will give the appearance of an open jacket over a vest- they’re actually one piece. THEN, the back is attached- it looks like a jacket but it’s actually just an extension of the front and it treated like a bodice for construction purposes. It’s a lot of illusion with hidden structures.

It was a constant process of fitting and refitting…and very importantly, this was all done wearing the corset that’s ultimately going to be worn underneath. This is a step you cannot cut corners on- you need to be mindful of the corset you’ll be wearing with the dress and work accordingly. It’s all about of structure and to get the get results, you have to work with that in mind.

More adjustments and onto selecting the right color and fabric combinations…

I wanted to combine a series of textures so that meant using a combination velvet, smooth-finish silks, and wool soutache. Even the buttons play a role!

Lapels are important part of any 1890s bodice/jacket design and I had a choice of combinations: Dark bottle green and medium brown soutache?

Or an orange-rust velvet with the medium brown soutache?

In the end, I opted for the bottle green velvet combination. Below is the first stage completion of the bodice. The pale taupe and blue woven silk I choose for the faux vest is beautiful but it loved to shred… 😝

Here’s a view of the finished bodice. I opted to put the soutache on the faux vest rather than the lapels. And just to add some interest, I tacked in some lace around the neck.

Some observations: this was a lot more work than what I was expecting, especially when it came to working out precisely how the bodice/jacket was going to be constructed. It can be very deceptive. But, once I worked out the specific construction, choosing the materials and trim was fairly easy. The main fashion fabric is a tropical weight brown wool that will wear nicely here in the warmer climate of the American Southwest (if it get colder, I can always wear a cape or cloak over it- it’s all about layers!).  The bodice front closes with hooks and eyes- the buttons are purely for decoration (as was the case for a lot of period dresses of this type). Larger buttons were used on each side of the pseudo-jacket to further emphasize the jacket/vest style; this style leans towards neo-directoire it’s not quite there. Finally, here’s just one of many pictures of the dress in action:

This has definitely become my go-to 1890s days outfit. In the next post, I’ll show some details about the walking skirt, so stay tuned! 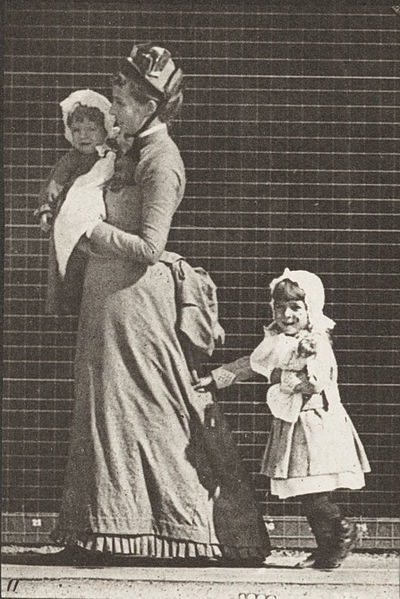 What ultimately became the distinct walking suit style of the 1890s seems to have gotten its start by 1884 as a walking dress that was meant as a more practical garment. Below is some commentary from the December 1884 issue of Demorest’s Family Magazine:

As promised, here’s a little video we made of our trip out to the Mescal Movie Set: