During his lifetime, Charles Worth was extremely wary of journalists and rarely gave interviews. When questioned during those rare interviews on the nature of fashion, his answers were vague and provided little insight as to his thought processes as a designer. However, upon his death in 1895, his sons were somewhat more forthcoming about Maison Worth’s approach to fashion and in particular, Jean Worth who managed the design side of the house. In an interview by a one Marie A. Belloc for Volume I (November 1896-April 1897) of The Lady’s Realm, Worth comments on the nature of fashion, stating:

It would be impossible to lay down any general theory or rule, so much that is indefinable and so many hidden influences go to the making of a mode—especially nowadays, when many marvels of colouring once reserved to painters and artists are within the reach of every intelligent artisan who cares to spend his Sunday afternoon at the Louvre, or who can afford a seat in the upper gallery of the Opera. Take, for instance, the rainbow effects that were lately the only wear among the Paris populace. No doubt Loïe Fuller and her serpentine dance were responsible to a great extent for the sudden interest taken in prismatic colouring; but the Japanese had, of course, long delighted in these multi-coloured effects, and the French eye had gradually become accustomed to rainbow variations. The famous American dancer simply crystallised floating impressions, which had long been with us. 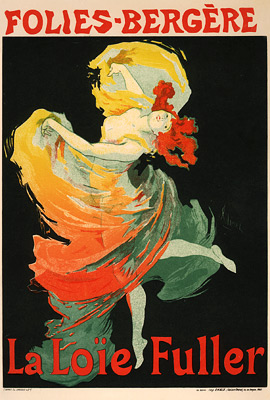 As far as who sets fashion, Worth goes on to explain that:

There can be no doubt that certain élégantes, who have the courage of their convictions and a belief in their own charms, can impose whatever style of dress suits them best on the world at large. For instance, a beautiful woman with a long neck wears a high collar, and all her plain friends follow her example. A notable leader of Fashion gets tired of narrow skirts, and appears suddenly in a full round jupe. Her appearance creates a sensation, and the next day, those women who have seen her in some public place or on some official occasion, wearing with grace and effect what appeared outré and old fashioned, follow her example.

Seems pretty basic but he’s tapping into the psychology of human nature in that there are some who are leaders and others who are followers and it’s the leaders who determine the next big thing in fashion (which was, no doubt, also good for Maison Worth’s bottom line).

In regard to changing fashion styles, Worth notes that:

I naturally do not concern myself with the popular modes. The moment a fashion becomes exaggerated- in other words, universal- we have to begin to think of something to replace it. I am often asked by English clients whether the big sleeve has come to stay. All I can say is, that exaggeration will kill any model, however becoming. Not only does it make the fashion common, but a woman rarely looks well or artistic in an outré garment. Of course, there are certain people who can wear anything and look well…

Worth goes on to note that color is one of the most important part of any design and especially how it relates to the individual:

I am always on the look-out for new and old ideas, and new schemes of colouring. Colouring, as you are aware, plays an important part in modern dress. I even yet remember with what difficulties my father met when he
tried to impose the slightest modifications in the hard, metallic tints which were for so long literally the only colours introduced into dress. An attempt at anything artistic was looked at with terror and suspicion…

For years my father tried to introduce this eminently becoming harmony of colour. Some of the most beautiful brocades ever made to our own order were tinted in this fashion. But it was not till an accident- in other words, the courage and audacity of one of our handsomest clients- brought the beautifying qualities of this combination before the public that we were ever able to make the experiment on a large scale; and the same may also be said of yellow and pink, pale blue and violet, and many others of the symphonies of colour now universally adopted. Of course, it is only fair to add that nothing can be more horrible than these violent contrasts, unless combined and imagined by a really artistic eye. But that is more or less true with anything connected with colour and form; for what looks well on a red haired woman makes a brunette look sallow, and so on.

Throughout this interview, the theme of color can be seen and there’s no denying that it’s a powerful concept, especially influencing fashion. At the same, Worth also notes that people are resistant to change and will only do so when a fashion leader (i.e., fashion influencers) decides to make a change.  It’s also interesting that both Worth senior and junior  sought to bring about color combinations that were harmonious to each other as well as the individual client. Below are just a few examples:

Throughout the late 19th Century, Maison Worth utilized just about every possible color in varying combinations and for the most part, they seem to work.