It’s always a treat when we can view a dress that’s depicted in a painting and the same dress that the painting was based on. In this case, we have the dress that was work by Louise Pomeroy in a portrait that was painted by John Singer Sargent in 1887.  🙂 First, the portrait:

And now, the dress:

According to the museum website, the dress was imitation of a Worth design and was reworked sometime in 1902 when the original bodice was replaced. The dress is constructed from  silk velvet and taffeta and appears to have a princess line. The dress was perfect for the portrait in that it nicely harmonizes with the sitter’s complexion and hair. Interestingly enough, Ms. Pomeroy was pregnant when the portrait was painted and extra panels had been installed in the dress to accommodate the pregnancy.  This dress and portrait was part of an exhibition that was put on by the Museum of Fine Arts in 2019 entitled “Sargent and Fashion.:

This would have been a fascinating exhibit to have seen, especially since we’re long-time John Singer Sargent fans. Well, maybe in the future we’ll have another chance. 🙂

John Singer Sargent was noted for his portraiture and we’ve always found it to be a source of inspiration for our designs. Recently, we had the opportunity to visit the Tate Britain (aka Tate Gallery) in London where we  viewed the Portrait of Mrs. Robert Harrison:

Unfortunately this picture was hung up so high that I was unable to get a good view of the Portrait of Mrs. Robert Harrison, by John Singer Sargent.

Because of the height that the picture was displayed, we almost missed it…Here’s a better view of the work, courtesy of the Tate:

When we entered the gallery where this picture is displayed, we found that it was very difficult to view because it was hung high up on the wall. The only way to get a full view without neck strain would have been to stand on the other side of the gallery, something that’s impossible with the constant crowds. Not the most optimal viewing experience, to be sure.

Turning to the portrait itself, the one thing that caught our eye was red portions of the dress, or rather, what appears to be a red surcoat or coat worn over a fairly conventional white day dress. It’s definitely a style we haven’t encountered before, especially for the 1880s. For a little insight, below are some comments from the Tate Britain website:

The Portrait of Mrs Robert Harrison was begun in 1886, shortly after Sargent had returned from a summer in France. Ormond has suggested that this painting is a bridge between the two dominant styles of late nineteenth-century French painting, Realism and Impressionism. The details of the head and hands are precise, yet the colouring of the portrait shows a move away from the old masterly emphasis of Sargent’s style, inspired by his friendship with Monet and the work of the Impressionist artists he had seen in France.

As for the dress, the Tate notes the following:

Following the exhibition of this portrait at the Royal Academy in 1886, The Athenaeum reported that ‘An exercise in white, red and grey; is, so far as this goes, excellent, although it is decidedly unpleasant as a household companion, and, for the owner’s sake, we hope unjust to the lady’. Her unusual dress was also commented upon. The columnist for the Evesham Journal and Four Shires Advertiser exclaimed that she had never seen Mrs Harrison ‘wearing such red wing-like appendages to her costume, which look as though about to expand and convey her to the regions of Mephistopheles’

Not  particularly positive. Of course, Sargent could have simply added them in, artistic license and all, but then again, perhaps it was some simple affectation by Mrs. Robinson herself.  Either way, the pops of red definitely catch the eye and makes this portrait more interesting striking, elevating it out of the conventional. Sometimes one finds the most interesting details in painting when it’s least expected. 🙂

Saturday finally arrived it was time head over to the the John Singer Sargent exhibition at the Art Institute of Chicago. After a quick breakfast at the hotel, we walked three short blocks to the museum and quickly took our places in line. Having a membership definitely made a difference in that museum members were admitted a half hour before the general public and that gave us a lot more time to take in the artwork before the masses made their appearance (we HATE crowds in museums). Upon our admittance, we of course immediately made a beeline for La Carmencita:

Given the difficulties of taking pictures in museum conditions, here’s an “official” version:

Born Carmen Dauset Moreno (1868 – 1910), Carmencita was a Spanish dancer who rose to prominence in both America and Europe and it is said that Sargent met her when she performed at the Exposition Universelle in 1889 and he was entranced with her. In a subsequent meeting in New York in 1890, he persuaded her to pose for this portrait. Here’s a close-up:

Looking at the portrait in person, the dress seemed to be more of a light, almost lemon yellow but this might have been due to the lighting more than anything else. Other pictures show the dress with orange tones. The specific details of the dress are somewhat abstracted, almost a blur in places, and suggests constant motion- according to one account, Carmencita was a restless sitter so Sargent had to work quickly. But for all that, the portrait is stunning and definitely shows a counterpoint to the society portraiture that Sargent was known for. 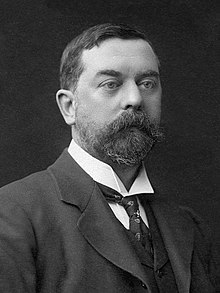 The next painting that caught our eye was this 1892 portrait of Mrs. Hugh Hammersley:

And the “official” version:

The one key element that drew our attention is the color of the dress- a saturated red. But even more striking is how the dress reflects light and the whole effect suggests a deep silk velvet. Framing the dress is swirl of gold trim running along the hems, upper bodice, and sleeve cuffs. As with La Carmencita, the dress details are abstracted and lacking in detail- here, the sum is greater than the parts. Here’s a close up:

Looking at the portrait closely, you can see a variety of red shades and tints, the effect is amazing. 🙂

The next picture to catch our eye was this 1897 portrait of Mrs. George Swinton (Elizabeth Ebsworth):

And for the “official” version: 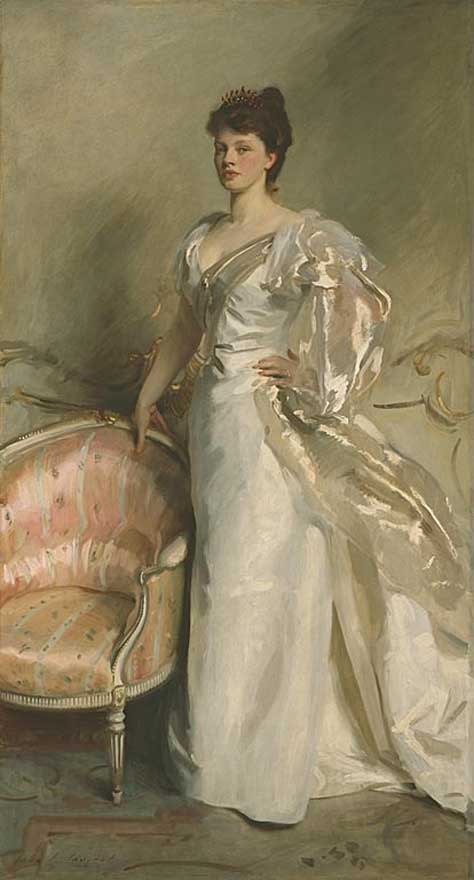 This one is definitely shades of pink and in contrast to the other ones, this portrait is more about the sitter- it just reads pure attitude. Interestingly enough, although she came from an upper class background, she insisted on pursuing a singing career and successfully did so for a number of years. Also, interestingly enough, this portrait also features in the satiric picture painted by Norman Rockwell in 1966 entitled “Picasso vs Sargent:”

One final highlight that we found striking was this 1898 portrait of Miss Daisy Leiter (sorry for the crooked picture):

In this portrait, Singer captures the swirl and slow of the dress fabric, giving it a sense of motion. The sitter’s expression goes a long way towards giving this portrait a sense of youthful energy and life and once again, it’s more a matter of the sum of the parts having more impact than individual elements. Finally, there were a lot of exquisite works on display, both as part of the specific exhibition and the Art Institute in general and for us, it was definitely worthwhile attending. It was definitely inspiring. 🙂

It’s been a whirlwind weekend visiting Chicago and it went way too fast. Unfortunately, professional commitments didn’t give us a lot of time so we packed in a lot of museum viewing in one day, caught a wonderful mean at the Burghoff, a traditional German restaurant dating back to the 1890s, and then returned to the hotel to rest up for the trip home. It’s difficult to update the blog while on the road so more detailed posts will have to await our return so stay tuned! 🙂

And a little something for the trip home…

We have arrived in Chicago safe and sound and we got up bright and early to get a good place in line for the John Singer Sargent exhibition at the Art Institute of Chicago. We’ll have more soon but we’ll leave you with this in the meantime: 🙂