After many adventures in and around Bath, we finally reached the high point of our trip to the UK- the Prior Attire Ball! 🙂 Held in the historic Bath Assembly Rooms, the ball lasts for four and a half hours and features various historic set dances as well as waltzes and polkas. In between, a buffet supper is served and there’s a bar. The Assembly Rooms were designed in 1769 and opened in 1771 and were intended as a social center for Bath’s upper crust visitors (to include royalty) who would descend on the town in droves (today, the Fashion Museum Bath is located in the basement of the Assembly Rooms). There are actually a series of rooms of which only one was used for the dancing and the others for the attendees to eat and socialize.

Because we were staying in a hotel just up the street from the Assembly Rooms, it was a quick easy walk in clear whether (no threat of rain) thus we were not burdened with having to deal with taxis and all that (try stuffing people wearing ballgowns into a Prius- not fun!). Here’s Karin upon arrival:

With all the dancing and such, we didn’t have an opportunity to get many photos but trust us when we say that it was a magical evening and it was well worth the effort getting to Bath. 🙂

While we were away in England, we had the opportunity to visit The Vyne, an historic manor house located close to Basingstoke in Hampshire. Originally built between 1500 and 1520 for William Sandys, Henry VIII’s Lord Chamberlain, the house was later acquired in 1653 by Chaloner Chute, a successful barrister and remained in the Chute family until it was acquired by the National Trust. Over the years, the house has been progressively added onto and is a pastiche of various styles ranging from early Tudor through the 19th Century. One of the most interesting aspects is that the house contained a small chapel, complete with stained glass windows.  The day we visited, it was cold, windy, and overcast but that didn’t deter us any, we managed to get a number of very nice pictures.

First is the exterior:

This is the back side of the main house. To the left is an outbuilding.

The front of the house. 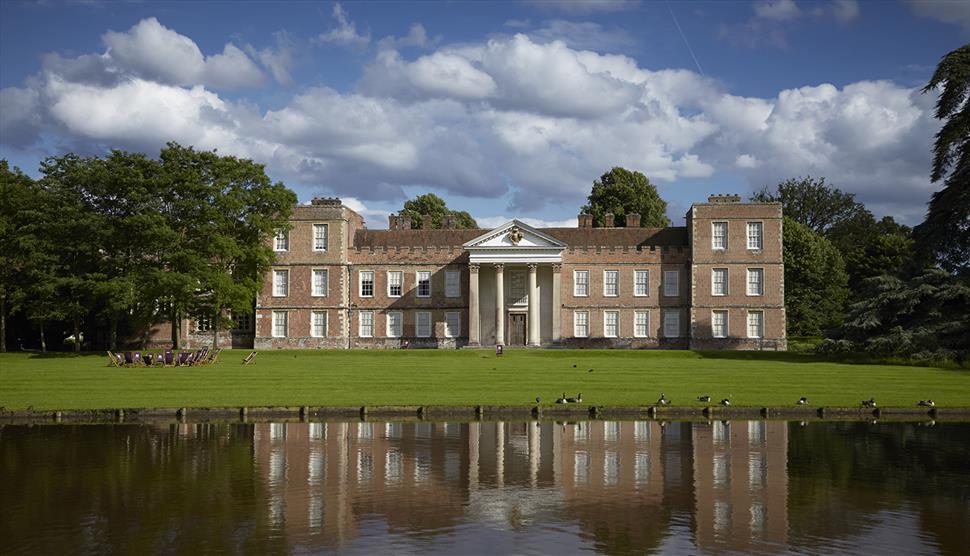 Here’s a better view of the house, courtesy of the National Trust.

And now some of the interior:

A little humor for the camera…my reaction after receiving the latest bill from Charles Worth.

Visiting The Vyne was one of the major high points of our visit to England and it was definitely worth braving the cold and damp. The estate provided a wonderful backdrop for picture-taking and we only wish that the weather had permitted us to get some more pictures of us outside. We would definitely love to visit again in the Spring when the all the plants are in full bloom. All in all, a special day. 🙂

Things have been hectic at the atelier- between receiving shipments of the fabric that we’d bought in the UK and catching up various housekeeping chores, it’s a wonder that there’s time for actual sewing… 🙂 Well, after a long break, I was finally able to finish up on a few vest projects that I’d been working on for awhile. Here’s one of them:

The above vest is constructed from a pattern made by Laughing Moon that I modified for my height. The above example is the second I’ve made using this pattern and overall, it went smoothly. The pattern is based on period originals and as with the originals, there are no short-cuts- patience and and attention to detail are critical. For materials, I used a lightweight herring bone weave dark rust-colored wool combined with a lining of black polished cotton. I’ll definitely be using this pattern in the future. 🙂

Last Saturday in Tombstone, an older gentlemen wearing what could be described as “gunfighter” clothing ran up to me and exclaimed “You must be a dandy- where did you get your suit?” I was a bit taken off-guard and was at a loss for words, especially with the “dandy” part. Dandy? Hmm.. I’ve never considered myself one, what’s up with that? And while we’re at it, just what exactly is a “dandy” (or more properly, “Dude”) anyway? Roughly defined, a dandy is “…a man who gives exaggerated attention to personal appearance.” Interesting… 🙂

I was flattered (I think) but puzzled- all I was wearing was a simple sack suit that any man in an average Western town would have worn. I wasn’t trying for an extreme impression but rather I was seeking to portray an average middle class Victorian man. After thinking about this for awhile, I realize that part of the problem stems from modern perceptions of dress equate anything involving the wear of coat and tie as “formal.” Moreover, as it’s been commented on by fashion writers ad infinitum, in recent years male fashion has become increasingly informal and especially when it comes to the wearing of ties and suit coats.

This move towards informality is also reflected in Old West reenacting (a pretty broad category) in that many groups tend to classify anyone wearing a sack suit or frock coat as being a “townie” and somehow not being a “true” Westerner compared to the stereotypical movie/TV image of the rough, tough cowboy who’s armed to the teeth. actually, nothing could be further from the truth. Just about anyone with a pretense of social standing dressed in a sack suit or frock coat on a daily basis to even include lawmen such as Bat Masterson and Wyatt Earp, to name a few:

Even out in the field, lawmen could look a bit dapper…(of course, this could have been staged but I doubt it)

So why the misperception? Well, let’s talk about men’s day wear and especially the near-universal sack suit. By today’s standards, the Victorian Era was exceedingly formal and this applied to all phases of dress. While much of this was more of a middle and upper class thing, the lower classes still tended to observe the same formalities, as best they could, and that was reflected in the idea of “Sunday best.” But no matter what class you were, you always attempted to show yourself at your best.

When it came to dressing for a day in town during the late 19th Century, the most common type of daywear for men was the sack suit. The forerunner of the modern business suit, the sack suit, or lounge suit as it was termed in Great Britain, originated in France as the sacque coat during the 1840s and took its name from the way it was cut (contrary to popular belief, the sack coat did NOT get its name from its loose fit “like a sack”). In contrast to the more elaborate frock coat whose back was constructed from four basic pieces, the sacque coat was simplified, consisting of two basic pieces. Moreover, the sack coat was designed to fit loosely.

As can be seen from the above, daily menswear tended towards the formal and semi-formal and this was the norm, even in the West (or course, there were always exceptions). In the end, it’s all a matter of perception but it’s easy to allow modern ideas about dress to cloud and distort what was historically done. Worse, is when reenactor groups further spread misinformation by using modern assumptions to base their standard/pronouncements about historical garments. I’ll be commenting more about this in future posts so until then, do your research and don’t let modern attitudes cloud your judgement. 🙂

I completely admit that this post is bit tardy, considering that I attended this event back in April, so I apologize for the lateness of this post…enjoy!

Recently I took a break from the usual round of activities to travel back east to Newville, Pennsylvania to attend the Great War Association’s (GWA) Spring 2017 battle event. For those of you who may not know, the GWA is an umbrella organization for First World War reenacting that draws reenactors from all over the nation (and even Canada) and they sponsor two events yearly at their site in Newville, one in the Spring and one in the Fall. Events typically draw anywhere from 300 to over 600 reenactors (Fall is typically the better attended event). The site itself is a small-scale recreation of a First World War battlefield complete with shell craters, trenches, bunkers, and even burnt-out buildings- it’s truly a “reenactor’s reenactment”.

Here I am looking all heroic and all…

I’ve been involved in the First World War reenacting for over 20 years and I have always meant to participate in a GWA event but, as usual, life usually got in the way until this Spring when I decided that I needed a small break from the usual so off I went. The logistics of getting there was interesting to work out, especially since I’d never been there before, but in the end it all worked out. I found that flying into Baltimore was the most practical- there are cheap non-stop flights available on Southwest Airlines and rental cars are easy to arrange at affordable prices (of course, it’s even cheaper if you’re traveling with others). Finally, I was able to get a couple of good motel rates for before and after the event itself- it pays to book early. 🙂

Weather-wise, Pennsylvania presented a bit of a contrast to what I am used to in Southern California- it was warm and humid  during the day (and really warm when the sun would come out) combined with the occasional shower. At night, the temperature would drop almost 20 to 30 degrees and on the last night of the event, it was freezing. In many ways, this mirrored the actual Western Front experience although we only had to “endure” for two days.

So, what’s the clothing tie-in? I thought  you’d never ask…well, in contrast to what I normally deal in, the order of the day is wool…lots of wool in shades of feldgrau and steingrau. Below is feldgrau as defined by the RAL color standard (RAL is the German color standard that was initially developed in 1927 and is the equivalent of the American Federal Color Standard System). Below is the RAL standard for feldgrau:

Needless to say, the subject of color is very subjective so the above is just to give a general idea.

Me coming out of the rain. Lack of sleep caught up with me…and yes, the wool does repel water (to a point)

As to the uniform itself, I am wearing the 1915 (1916 pattern for Bavarians) pattern coat, or bluse, which was a wartime simplification of the basic tunic. For trousers, I am wearing the prewar 1907 pattern. As for comfort, well things can get itchy sometimes and definitely hot in warmer weather but in cold weather, it serves its purpose very well.

Overall, it was a fun and exciting trip and I am looking forward to returning in the Fall. 🙂