Today we were planning on heading south to San Diego to take part in the fashion show at the Gaslight Gathering Convention. Unfortunately, due to events beyond our control, we had to cancel our appearance but we still want to promote the event. However, we still want to put a spotlight on the show’s theme which is based on Alphonse Mucha’s Seasons, a series of prints he created in 1896 depicting the seasons as personified: 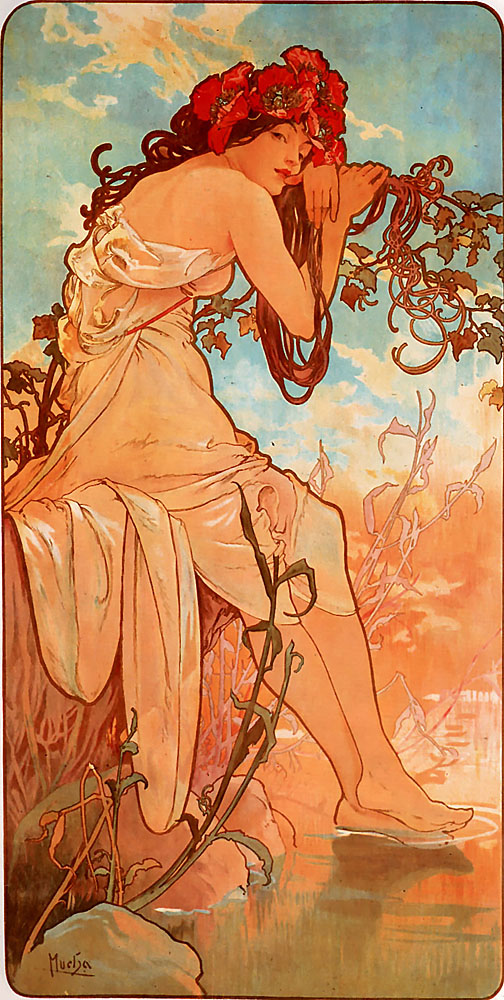 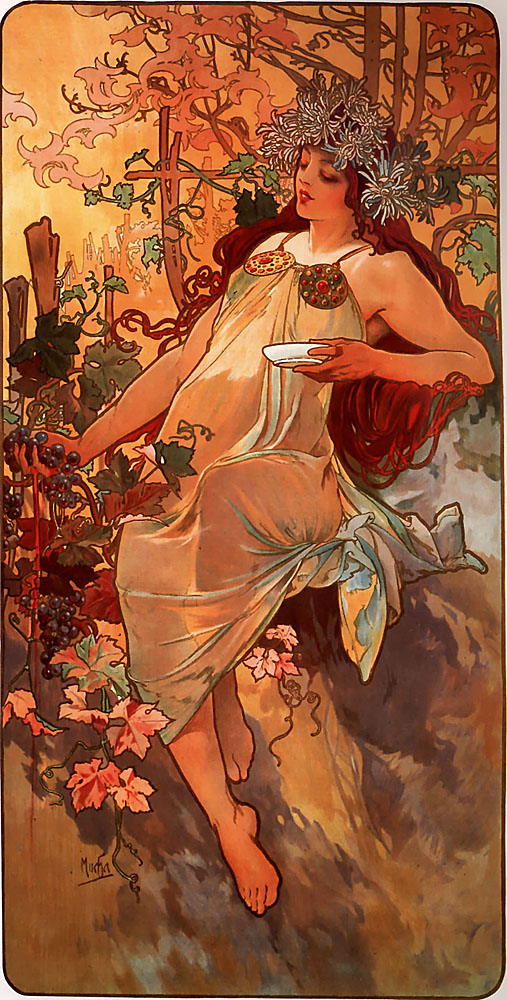 The Seasons was so popular that a second set was subsequently released in 1897. These are simply exquisite and an excellent example of Art Nouveau.

We sincerely apologize for having to cancel our engagement but hope there will be frther opportunities in the future.

We wanted to let you all know that during 2016, we have plans to appear at the following conventions:

And we’re trying to work in a day at the M7 Convention scheduled for October in Los Angeles, CA

We look forward to meeting you at one of these fine gatherings. Stay tuned for further details! 🙂

Adam ponders the meaning of steampunk…

Over the years, we have had the opportunity to work on projects that cross over into the steampunk genre, blending  historical Victorian (and sometimes Edwardian) fashion elements with the purely fantastical. Along the way, we have often been asked “just what exactly is steampunk”? It’s not an easy question to answer and while there are, no doubt,  many valid answers, below is our take on the genre.

To begin, we have found the following definitions to be useful:

A subgenre of speculative fiction usually set in an anachronistic Victorian or quasi-Victorian alternate history setting. Basically,  what the past would look like if the future had happened sooner.

For our purposes, both of the above definitions pretty much covers it; simply put, it’s about a future that never was. Because steampunk’s literary origins stemmed from the cyberpunk genre,  steampunk is often set in an alternative history of 19th Century Britain during Queen Victoria’s reign, the American Wild West (which itself has, at least in part, given rise to another subgenre known as “weird west”), or some sort of post-apocalyptic future in which steam power has become a central feature. This list is by no means exhaustive and various authors have pushed the genre in various new  directions. In explaining steampunk to people, we have found it most useful to refer to Jules Verne’s 20,000 Leagues Under the  Sea or HG Wells’ The Time Machine, both which have been made into several movie versions and are readily accessible.

In terms of costuming, styles range widely from historically-based Victorian Era clothing with little suggest anything that’s specifically “steampunk” per se to costumes that are a mix of fatastical and Victorian elements. Also, many costumes are intended to portray a specific movie or literary character or simply a character  that the individual wearer created. There are no “rules” per se but there does appear to be several conventions that show up often.

One of the  most notable style conventions is to wear googles or some other type of eyewear and it’s almost de rigour (although some people are now avoiding this style  due to overexposure or simply because they feel that it’s become too cliche). The choice of color palette tends towards the sepia and the darker earth tones to include  various sepia and tan/earth/brown shades which fits in with the dark film noir feel that’s characteristic of much of steampunk and reflects the genre’s connection to  cyberpunk. At the same time however, there are those who wish to break away from the confines of the somewhat steriotypical sepia and dark colors and there has been a recent push towards brighter colors to include jewel tones and the like. While the darker colors have not gone away, there has been a trend towards using an expanded color palette.

The ubiquitous steampunk googles, these come in a variety of styles and shapes that are only limited by your imagination.

Below are a few examples of steampunk fashion:

A little bit of everything…

As you can see from just the small selection above, there’s quite a variety of styles that are used and they’ve been modified to suit the taste of the individual. But interestingly enough, while steampunk draws heavily on Victorian Britain, there are other interpretations that take the genre in diverse directions:

An Indian take on steampunk…

And another “Indian” take on the subject…actually, Native American… 🙂

The above is only a small sampling but it’s obvious that steampunk draws on a number of influences that are only limited by the participants’ imaginations. 🙂

So, in the end, we applaud the amazing diversity that this genre has given rise to and we look forward to seeing more in the future.

This weekend, we attended the Gaslight Gathering 5 event at the Town & Country Hotel in San Diego. Originally, we were going to be spending the entire weekend there as vendors but due to a backlog of projects, we were forced to scale back our involvement to only one day- Saturday, September 20.

Karin after applying some final touches…

We arrived about 1:30 pm or so after an uneventful drive south (this time we went by the I-15 and missed the ever-present traffic jams of the I-5). Registration check-in was painless and soon we were taking in the sights and sounds of the convention. Because of the hotel’s somewhat chaotic layout, it’s hard to get an idea of the scope of the convention but from what we could tell, it was fairly well-attended in spite of the unseasonably hot and humid weather.

Here we are getting in synch with the tropical vibe…

We made our way to the dealer room, checking in with our compadre Shurie Southcott of Lady B Hats and meeting up with old friends while basking in the wonderful air conditioning). While in the dealer room, we observed a number of interesting unique costumes to include this gentleman:

Later, we gave our “Victorian Bijoux” presentation which was very well-attended (in spite of the small room we had been assigned and poor air conditioning). We brought a number of items to show. We hope that it was informative and that everyone walked away with at least one piece of information that they could use. We especially enjoyed the question and answer period afterwards and we could have gone on a lot longer but we had to vacate the room for the next presentation.

Overall, we spent a pleasant day at Gaslight Gathering and while the weather presented some challenges, we managed to work around them. We look forward to attending in the future.

Just to announce that at 6:00 pm on Saturday, September 19, 2015, we will be giving a presentation on Victorian Era accessories entitled “Victorian Bijoux” along with our good friend Shurie Southcott of Lady Bird’s Hatberdashery at Gaslight Gathering, a steampunk-themed convention in San Diego.

We’ll be giving an overview of various Victorian Era accessories that can be used to help create that perfect, individually unique look for either steampunk or just plain historical wear.

Come check us out, we look forward to seeing you there! 🙂