One of the more pleasant aspects of researching fashion history is when one comes across something new and interesting while looking for something else. It can easily drive one to distraction but thanks to electronic media, it’s easy to make a note of it and come back to it later. In the course of researching 1880s dresses, we came across references to “piña cloth” such as this one:

Unfortunately, details as to the specific construction of the dress and its provenance were not available except that it was made in 1880 by a dressmaker in Geneva, Switzerland. But nevertheless, I was became curious about the piña cloth aspect so I did some further research.

Piña cloth is light and airy, similar to linen or hemp and it has a naturally glossy sheen that acts to protect the fibers and has a hand similar to silk. The manufacturing process is labor-intensive and production is all done by hand. Piña cloth is still made today with production largely centered around Aklan Provence in the Philippines which is one of the oldest production centers (Piña cloth runs from $80 to $100 a yard in the US and the width is typically 26 to 30 inches wide- it’s not cheap). Piña is often combined with silk, cotton, or polyester and the fabric has a high absorbency to dye.

A Filipino man in the province of Palawan scrapes off the top layer of a pineapple leaf with a ceramic plate to reveal the fibres beneath. Photograph by Jeff Werner, May 8, 2007. 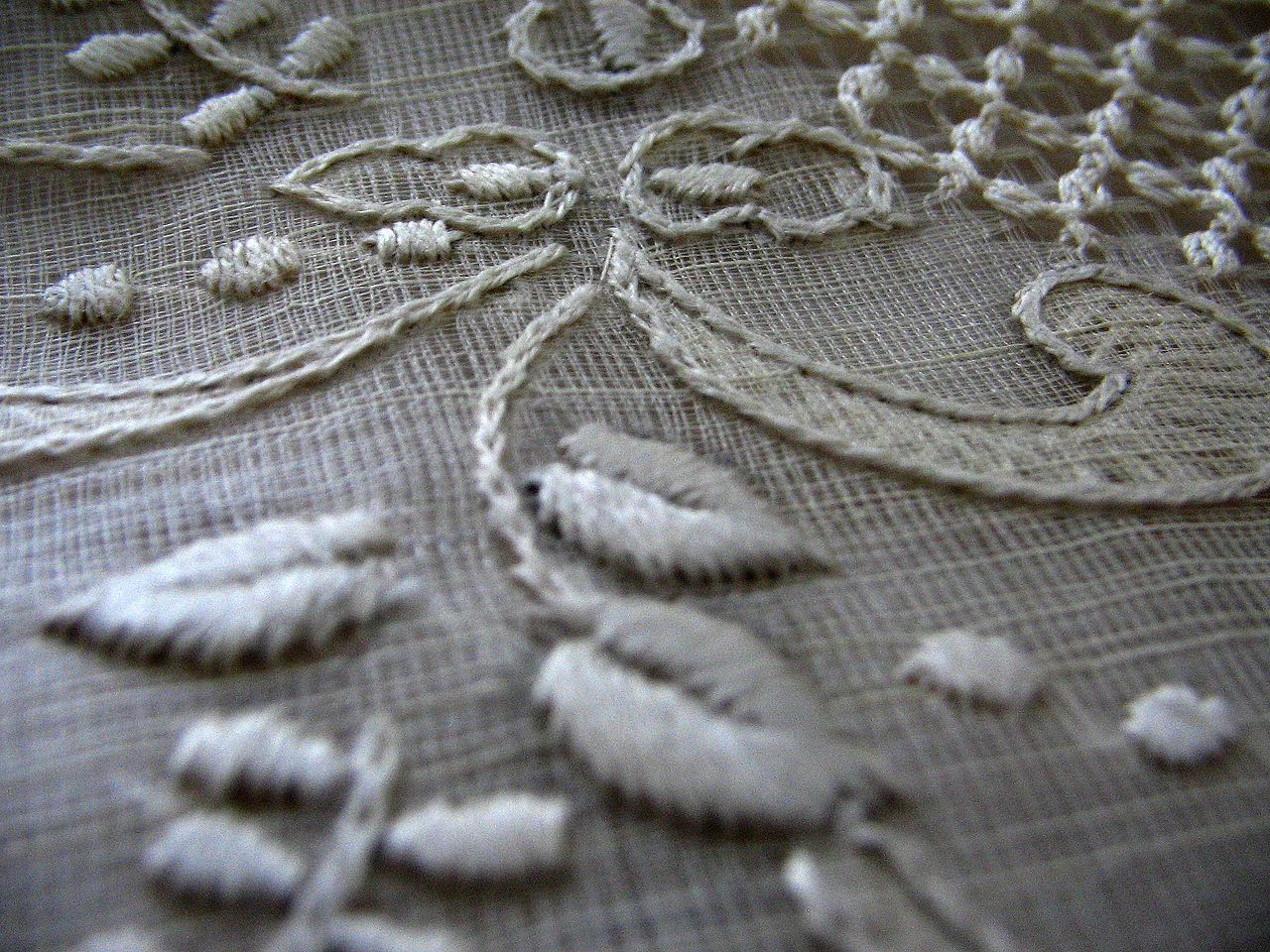 Close-up of piña cloth on a Barong Tagalog

For a short video detailing how the filament is made, click HERE.

In the Philippines, traditional clothing was made from Piña cloth such as the Barong Tagalog and later incorporated into Western designs. During the 19th Century, piña cloth’s characteristics made it a perfect textile for use in Western warm weather dresses. The cloth is also used for shawls, table linens, handkerchiefs, and bags. Just to show the possibilities of this fabric, below is a shirt/Barong from c. 1850:

Close-up of the fabric.

Piña cloth was exported world-wide from the Philippines from the 18th Century on and it was widely sought after because of its suitability for tropical climates. Below is an American ensemble dress from c. 1855 that incorporates piña cloth on a large-scale:

From a close examination, both the outer and inner layers of the bodice are made of the same piña cloth. Given the amount of yardage that must have gone into the making of this dress, this dress represents a small fortune in fabric.

Finally, just to show that fashions of various regions/nations/cultures have a tendency to blend with each other, we included the following dress that represents a coming together of western and native cultures in the Philippines, and not surprisingly, it incorporates piña cloth:

The above dress dates from c. 1900 and is made from piña cloth for the bodice and silk for the skirt. The basic silhouette loosely follows the style characteristic of dresses of the late 1890s/early 1900s: the skirt has the upright silhouette with a train and the bodice is follows the shirt-waist style. Given the sheer piña cloth, there was no doubt some sort of under-bodice and perhaps a corset- this is something that would bear further research.

In recent years, piña cloth has undergone a revival in popularity, now being marketed as an environmentally-friendly textile, especially since its natural glossy shine gives gives the fabric a high degree of resilience and protection so there is no need for any toxic chemical treatments. Also fashion designers have increasingly incorporated it into their designs such as this dress designed by Rodarte:

We hope you have enjoyed this brief introduction on piña cloth and while this is not a cheap fabric, we do hope to incorporate it into some of designs at some point in the future.

One thought on “Piña Cloth”