Walking about in Bath was a pleasant experience and there’s actually a lot to see for such a seemingly small town. Of course, no visit to Bath would be complete without a visit to the actual Roman bath so off to the Roman Baths Bath (yeah, the name’s a bit redundant but it wasn’t my idea). Unfortunately, when I arrived there, the crowds were pretty thick so I had to improvise my camera shots as best I could. The baths themselves are actually about a 100 feet or so below the level today’s street level (needless to say, there’s been a lot of building in Bath since the Romans were there) and when you enter the museum, you actually make your way down before actually viewing the baths proper.

From what I’ve read (for a quick historical overview, click HERE), the Roman baths were built on a natural hot spring that the pre-Roman Celtic inhabitants regarded as a sacred site. The Romans built a reservoir to retain the spring waters and then built the baths around that, upgrading and adding more rooms and buildings over a span of several centuries. Here are a few views from the top as you enter the museum complex:

A few interesting notes- the green color of the water is from algae and today, the baths are not considered safe to swim in, however if you want the experience, it can be done at the modern Thermae Bath Spa which was opened in 2006. The statues that line the upper deck like the one seen in the above picture are actually Victorian Era creations, NOT original statues.

Moving our way down, we get some closer views of the baths:

The water from the springs come out from the ground at about 69 to 96 °C (156.2 to 204.8 °F) and flowed through open channels that were meant to cool the water down a bit before entering into the baths themselves. Also, lead pipes were also used to further distribute water to other subsidiary baths: 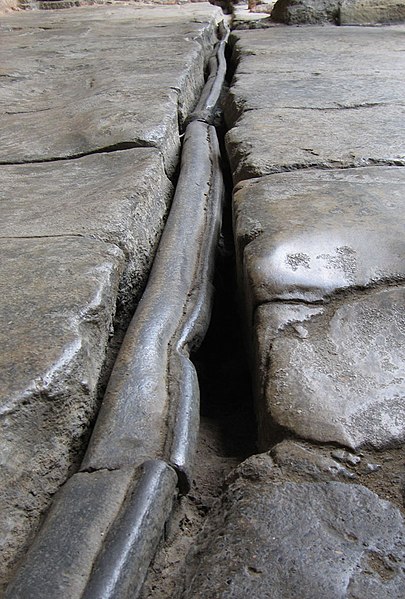 The baths were lead-lined and remain so to this day; they’re cleaned out on a quarterly basis:

And yes, you can still take the waters at Bath…there was a drinking fountain with paper cups available to the public. For hygienic reasons, the water itself comes from a separate hole that’s been drilled into the spring. The thermal waters contain sodium, calcium, chloride and sulphate ions in high concentrations. I sampled the waters and found it to be cloudy warm water with a mineral taste- nothing really surprising (OK, I was less than impressed).

This brief overview doesn’t to justice to the majesty of the place and what’s especially interesting is that is one of a few surviving examples of a Roman bath. Also, the baths here had the advantage that they required no heating up the water- that was all done naturally. Almost all other Roman baths required the constant heating and its attendant costs and logistical issues. This is definitely worth a visit and shouldn’t be missed.