And just for a change of pace, today we’re going to take a brief look at movie costumes and specifically, one particular costume- one of Marilyn Monroe’s gowns from the movie River Of No Return. Set in the American Northwest in 1875, this movie centers around a widower Matt Calder (played by Robert Mitchum) who has just been released from prison after serving time for killing a man while defending another. He arrives in a boomtown in search of his son who had been left in the care of a dance hall singer named Kay (played by Marilyn Monroe). Needless to say, the plot continues from there and we’ll leave it to you, dear reader to chase down the rest. 🙂 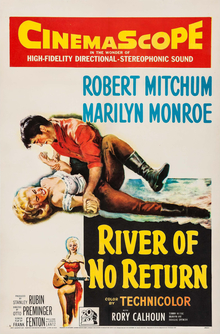 Naturally, where there are dance hall singers, there will be musical numbers and more so if the movie casts Marilyn Monroe. And of course, a singer needs a suitable dress…so here’s one:

And here are few of more of the dress itself:

The dress is constructed from jade green velvet and is trimmed along the hem and edges with black embroidery along with beading. It appears that the velvet started out as a dark jade color but it’s no doubt experienced some fading over the years.

Close-Up Of The Beadwork

And here’s nice view of Marilyn in the dress that shows the underskirt:

From the pictures, it would appear that there was also a split underskirt of red chiffon and acts as a contrast to the overall green of the dress. Needless to say, the effect was dramatic as Marilyn performed her song and dance number. 😉

The movie itself was not particularly great and probably the best that could be said for it was that the scenery was excellent (it was filmed in Alberta, Canada). As a final note, the dress recently sold at auction for $525,000, proving that the mystique of Marilyn Monroe is still alive and well. 🙂