When designing an 1870s dress, one is often faced with an overwhelming number of choices. While the basic 1870s style was characterized by the all-encompassing bustle silhouette, all of the other details were far from uniform and there were a bewildering variety of choices available in selecting the fabrics and trims. Moreover, there were many available choices in bodice, skirt, sleeve, and train design to include the princess line that came into vogue in the late 1870s. Moreover, compared to earlier eras, there is also a variety of color choices, all made possible by the development of aniline dyes.

In the above plate, we see a base fashion fabric combined with a second fabric that’s been draped over the first. The large scale use of fringe enhances the contrast and in the case of the left figure, the second fabric looks like it’s ready for slide off. Of course this is fashion plate and a bit of artistic licence is to be expected. 🙂

In the above plate, the contrast effect is achieved through the use of striped trims to “outline” the dress in key areas. Once again, the princess line allows for this technique to be used to its greatest effect, Now let’s look at some examples of extant garments:

With the above example, the secondary contrast fabric has been used to create a series of stripes running in a up the skirt on a diagonal angle to create a spiral effect. On the front of the bodice is a large panel in the same color along with two large sleeve cuffs.

Another creative way to approach contrast colors are to use two different colors in two different fabrics as with the silk velvet combined with a silk faille in the dress below:

But why stop there? 🙂 Contrast can be also achieved by having one of the fabrics be a stripe or other type of pattern as with the dress below:

All right, so we went a bit overboard with the last dress but it’s an interesting color combination of light pink and steel grey (although it’s hard to detect with the lighting- it shows up best on the rear). In the front is a wide panel of light pink that’s offset by the steel grey on the remainder of the dress (with the exception of some detail on the rear). The above examples are just a small sampling of the color possibilities that are available. Combinations could simply be a matter of varying color shades such as dark and light blue or they could involve a combination of two different colors. 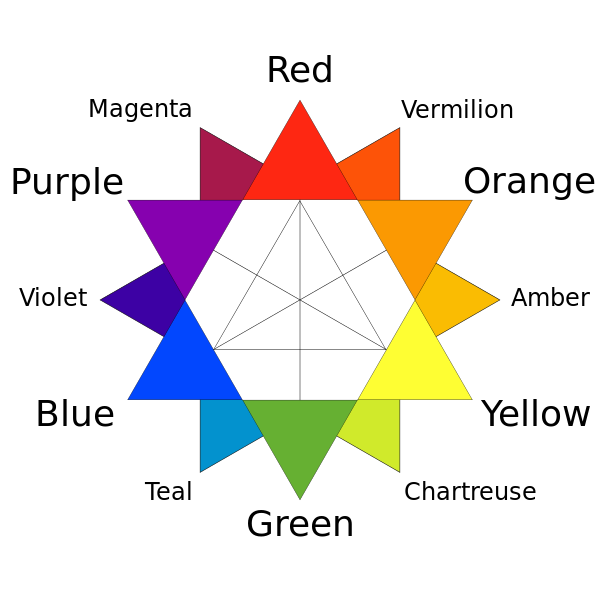 In the above illustration, the complementary colors are directly opposite of each other (e.g., yellow-purple, green-red, blue-orange). Naturally there are various shades in between and the complementary pairs will shift. The above is admittedly an over-simplification but it does give an idea of what designers were aiming for during the late 19th Century.

Just to complicate matters further is the idea of saturation. Saturation refers to the intensity/vividness of a color. Colors that are highly saturated are bold and rich, while those that are desaturated lack in vibrancy.

The above is by no means a comprehensive overview and admittedly a lot of this is subjective. The best suggestion we can give is to look and pictures of original fashion plates and extant garments, making allowances for fading and deterioration. Certain combinations are going to look “right”, others not so much (and some could be downright ghastly- no different than today).

We hope that this has provided some ideas to help you get started. 🙂