In the course of reading on Diana De Marly’s Worth: Father of Haute Couture, I came across a reference of Worth having incorporated bias cutting in his designs as early as the 189os. Needless to say, this piqued my interest and I set out to learn more. It is common fashion history knowledge that bias-cutting in dress construction was first utilized on a major scale by Madeleine Vionnet in the 1930s but the idea that Worth employed this technique earlier was a bit of a revelation to me. 🙂

So what is bias cutting? Essentially, it’s where the fabric is cut at a 45 degree angle to the fabric’s grain. Normally, fabric is cut either directly on the grain or perpendicular to the grain and most garments are constructed so that the grain runs vertical (i.e. up and down). This ensures that the fabric shapes properly, especially since the fibers running on the grain (e.g., the warp) is stronger than the fibers running crosswise (the weft). Bias cut fabric is more flexible, following the body’s contours thus creating a tighter, shapely look. Two garments made from the same pattern with regular cut and bias cut fabric can easily look very different.

To illustrate, here is a typical pattern piece and how the grain runs. If you were to cut on the bias, the the pattern piece would be angled to follow the true bias (defined as being 45 degrees from the warp and weft) rather than up and down to follow the warp.

Here is a detailed look at the fabric itself. The red arrow is the bias and it runs at a 45 degree angle to the warp and weft fibers (For a more detailed discussion, click HERE.): 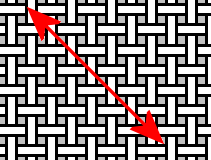 However, bias cutting can easily consume far more fabric make a garment than regular cut and bias cut fabric is often harder to sew on and prone to have twisting and distortion. And just for completeness, here’s just one example of Vionnet’s bias cut dresses:

So back to Worth… After a little research, I managed to locate the source of De Marly’s reference, the February 20, 1892 issue of Harper’s Bazar with the dress itself illustrating the issue’s front cover and titled “Worth’s Seamless Dress”:

And for a frontal view of the dress (unfortunately, the illustration is not the best):

So what about the dress itself? Here’s a brief description from the February 20, 1892 edition of Harper’s Bazar:

Seamless corsages have found such favor that a seamless dress have been produced by Worth’s creative brain. This is a dress of classic wool, as ladies’ cloth or crépon [crepe], drawn smoothly over a fitted waist lining of silk, and covering a. bell-shaped skirt of silk. Cutting the cloth bias facilitates matters in these dresses, as it then clings more closely when stretched around the waist, and also furnishes greater fullness in the skirt. Seams that are absolutely necessary arc concealed by trimming, and the dress is fastened invisibly, usually on the left side. The dress illustrated gives the effect of a princess back, with round waist front. Blue cloth is the material used with sleeves and panel of narrow bias folds applied on a maize yellow ground. Plissé [a form of crépon] wools woven to give this effect can be had in various colors. The yellow contrast, now so fashionable with blue, is further given in open gold passementerie, which curves up in front of the right arm, then crosses the back diagonally to the waist, extends across the front as a girdle, to meet on the right a similar band, with which it forms an edge for the inserted trimming down the skirt. A band of fur surrounds the left arm and borders the skirt. Later in the season the fur band can be replaced by a fine ruche of gold ribbon. Changeable taffeta silks are used by French modistes for the waist and skirt lining of wool dresses, with a pinked balayeuse of the gay silk at the foot.

The above description is very interesting in that the basic style is a princess line, a style developed by Worth in the late 1870s. Also, the emphasis is on making the seams invisible, hiding them behind trim wherever possible. Also, the use of crepe provides excellent drapability along with an interesting textured effect. Crepe was made from cotton, wool, silk and linen (today, rayon is also often used). To give an idea of the fabric’s appearance, below is an example of a crepe mourning bonnet, c. 1880: 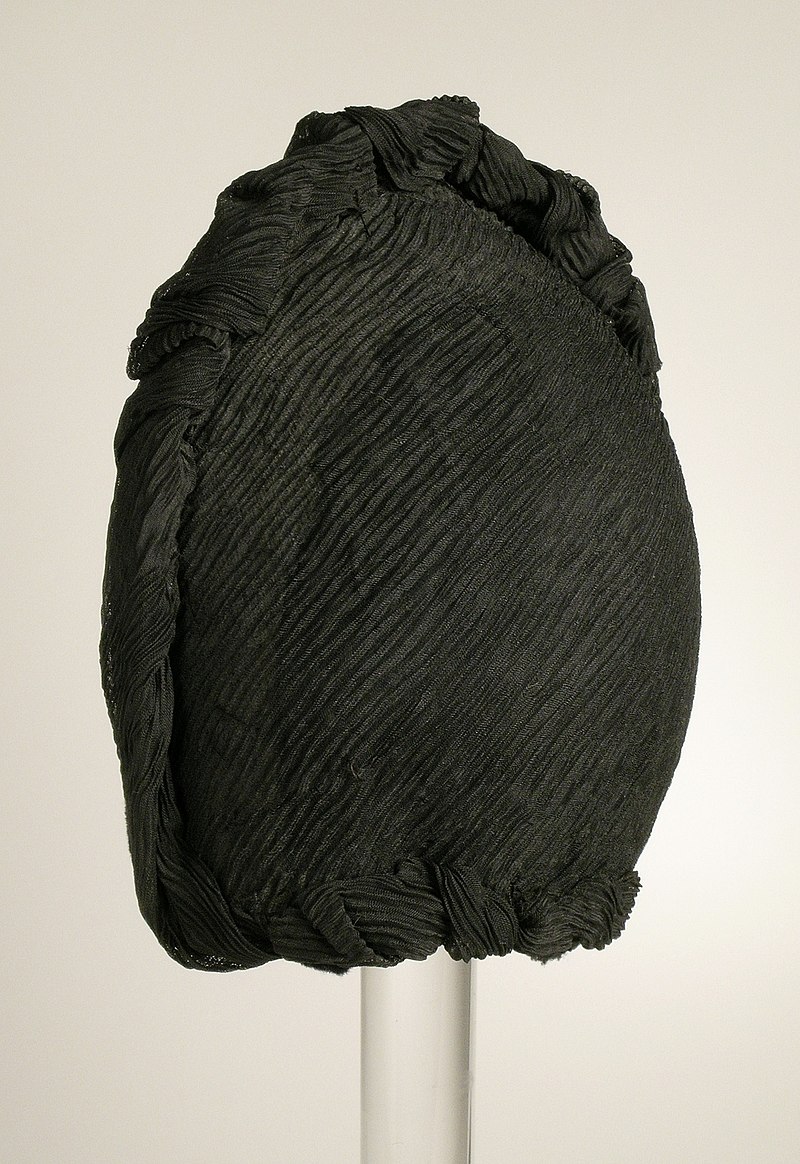 Crepe was used extensively for mourning wear but it was also came in other colors:

Now while crepe forms the outside of the dress, it’s also noted that the crepe is drawn over a silk waist lining and that the cress is cut on the bias. Unfortunately, there are no further technical details and, as far as I know, no surviving dress of this type so we can only make assumptions as to the construction. However, judging from the above description, it would been that the outer fabric on the dress was cut on the bias, then anchored over an underlayer of silk (I can only assume that it’s also cut on the bias). Also, arrangement of fabric chevrons on the sleeves are also an interesting use of the bias cut. Finally, it should be noted that unlike the later dresses designed by Vionnet, Worth’s bias-cut dress is restrained with the wearer’s silhouette being shaped by the underpinnings- primarily corset and petticoat.

Bias-cutting in dress design didn’t come into its own until the 1930s but it’s clear that Worth made some pioneering efforts in this area. However, given that the basic styles of the late 19th Century were defined by the corset various underpinnings, the bias-cut style could only go so far- foundation garments were also utilized with Vionnet’s but were not anywhere as severe.

We hope that you’ve enjoyed this look at a somewhat obscure aspect of Worth’s design work and we hope to be able to post more in the future. 🙂